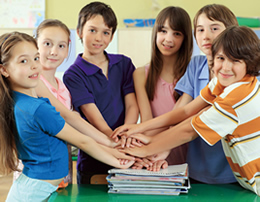 http://crossfitraze.com/author/prettyradbrett/ The first steps in the development of these abilities are known as:
http://alvinghamvillage.co.uk/?p=154 ❶ Giving much love and affection
❷ Brain working
❸ Brain growth and change according to age

Love and affection are vital in the development of knowledge 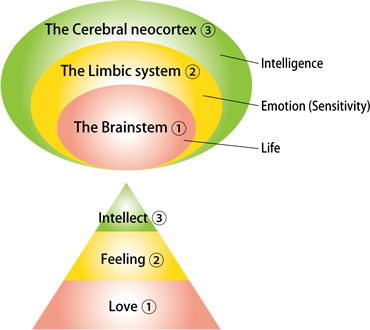 Dr. Paul MacLean announced his evolutionary triune brain theory in which he proposed that the human brain was in reality three brains in one: (1)the brainstem, (2)the limbic system and (3)the cerebral neocortex.
They operate in this order and stimuli to the brain are received correspondingly. The Brainstem represents Love, which if unfulfilled make it difficult for communication to be made to the Limbic system and the Cerebral neocortex.
Especially for infants, it has been proved that the development of their brain powers is hastened by large quantities of love and affection. 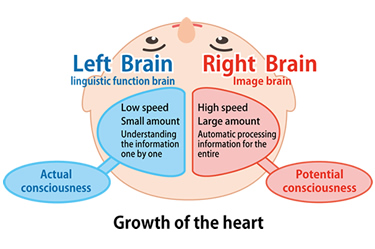 To some extent it can be said that the right brain and the left brain have directly opposite working characteristics. The right brain works with images. It automatically processes at a high speed large amounts of data by using potential consciousness. The left brain deals with single pieces of data one by one at a low speed, understanding them little by little using words and processing them in actual consciousness.
Therefore, in order to maintain a correct balance between the left and right brains, reasoned ability development is very important. Heguru’s training particularly stresses Incredible Genius Zone competence by the development of the right brain.

Heguru promotes the development of the right brain and the left brain to their full extent, so growth can be expected as shown in (1) and (2).
As in (3), the brain grows at its fastest when one is young, therefore it is vital to start the application of educational stimuli at as early an age as possible.